“Letters to Leo Kopp” portrays the collective imaginary of the emblematic figure Leo Kopp who arrived in the late nineteenth century from Germany to Colombia and then founded the Bavaria brewery.

At the Central Cemetery of the capital Bogotá, nowadays, every Monday numerous devotees are waiting in a long line to visit the statue on his grave. Bringing flowers, pouring rice or water, polishing and caressing the statue, whispering their desires in his ear.

But it’s not the only spot in the city where he is being remembered: in the district of La Perseverancia he left his legacy for being the founder of the neighborhood close by the beer factory. Its inhabitants lead us through the streets and houses and recall stories from different times.

The documentary film is a result of a CORRESPONDENCE between sound artist Diana Restrepo and visual artist Nina Bendzko and was produced with a radio feature directed by Diana Restrepo: 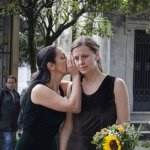 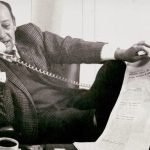